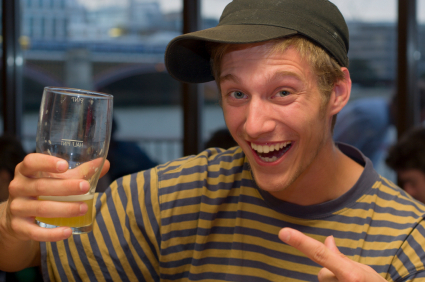 Drinkability of beer is an important driver of commercial success, but there is little agreement on how it can best be measured. When speaking of drinkability most brewers take it to refer to the quality of beer which motivates a consumer to have another one – ie to have two pints when they intended to have one, or have three when they intended to have two. What motivates a consumer to do this is a complex mixture of situation, psychology, physiology, beer chemistry and beer physics.

Despite its blindingly obvious importance to the brewing industry there appears to be little original literature in this area.

Work in Japan (Nagao et al, 1999) has drawn a connection between beer drinkability and gastric emptying. Beer quality attributes (such as off-flavours and tainst) which are perceived by consumers to be negative seem to restrict gastric emptying, minimizing the frequency and volume of urination. This has consequential effects on subsequent beer intake. You drink less when you ‘need to go’. A series of very good papers has been published on this area by this research group.

An attempt to evaluate differences in drinkability of beers and establish some of the drivers of this parameter has been reported by Parker and Murray (2003) and the area has been reviewed by Sharpe et al (2003) and Mattos and Moretti (2005). A symposium on drinkability of beer was also held in Scotland in late 2006 and a proceedings book published.

If I was to summarize all of this past work in one line – more questions than answers.

The relationship between beer freshness (aging) and drinkability is interesting. Many (including me) believe that stale beers (particularly lagers) are considerably less drinkable than fresh ones. While there are no doubt many reasons for this, the different mouthfeel characteristics of stale beer compared to fresh beer would seem to be important. From a chemical perspective, oxidation of polyphenols leading to a mouthcoating astringency, and formation of compounds such as 2-furfuryl ethyl ether in complex reactions may be important.

1.  Drinkability is a real phenomenon, not an abstract construct.

2.  Some beers are more drinkable than others. Leaving aside that it’s easier to work your way through six pints of 4% bitter than the same volume of 9.5% barley wine, the issue is that two beers of nominally the same alcoholic strength, bitterness and beer style can have markedly different drinkabilities. Big enough to cost you and all your colleagues your job if you work for the brewery that makes the less drinkable one.

3.  If you are trying to make a brand that needs volume for success, you either need a lot of customers or good product drinkability. Duh!

4.  Science has provided us with tools to understand this area – we just need to apply them.

The Top 10 Questions of Beer Drinkability

Questions that remain to be answered include:

1.  What is drinkability? What is it not? How do drinkability and satiety relate to one another?

2.  Does drinkability arise from a conscious process, or as a result of unconscious brain activity?

3.  How does beer composition affect drinkability? Is beer drinkability more about the absence of negatives, or the presence of positives? Some believe it’s all about making the beer ‘clean’ – not everyone agrees.

4.  Which is more important as a driver of drinkability – appearance or flavour? Some say we ‘drink with our eyes’ – the first few gulps maybe, after that taste does matter.

5.  Is product consistency a good or bad thing for drinkability? Does consistency lead to product boredom? In other words, can you have too much of a good thing? Most large brewers, and many smaller enterprises strive for product consistency. Some would argue that the more consistent some brewers products have become the less beer they have sold. Have they thrown the baby out with the bathwater?

6.  How might drinkability be measured? Many of the big brewers seem to be scared stiff of this area, worrying that anything they do might be seen as indirectly encouraging ‘binge drinking’ or get associated with other ‘health and safety’-related bad press. They may be right.

7.  What is the relative importance of sensory aspects and physiological aspects to drinkability?, ie if salts content of beer is an important driver of drinkability do the salts exert their effects by a physiological route, or via a sensory psychology route?

8.  What types of beer are most drinkable? What things do they have in common?

9.  What types of beer are least drinkable? What things do they have in common?

10. Perhaps the biggest question of all – why aren’t brewers falling over themselves to get to the bottom of all of this?