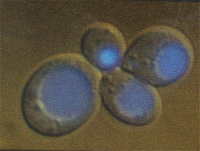 In  ‘what’s in a name’, the taxonomic journey of upwardly mobile lager yeast was tracked from Saccharomyces carlsbergensis, to Saccharomyces pastorianus. The nub of the piece was that whilst ale yeast was steadfastly and traditionally S. cerevisiae, the relatively ‘new kid on the evolutionary block’ – S. pastorianus – is a hybrid of S. cerevisiae and another yeast from the world of wine and cider, Saccharomyces bayanus.

The unravelling of this story owes much to the application of comparative genomics by Kodama and colleagues at Suntory’s Institute for Advanced Technology. However Kellis et al., (Nature, 2003, 423, 241-254) memorably brings this to life by noting that the sequence divergence between S. cerevisiae and S.bayanus is similar to that between human and mouse. Brilliant!

Anyway to recap, lager and ale strains are different! Ale strains have been evolving since (about!) 3000 BC whereas lager yeast evolved from the Bavarian breweries of the 1840s. Whilst genetically ale strains are highly diverged, lager yeasts are closely related to (the type strain) Carlsberg Bottom Fermenting Strain #1, the yeast isolated in the late 19th Century by Hansen.

Physiologically the high level differences between ale and lager strains are well known. Whilst top fermenting (ale) and bottom fermenting (lager) can be blurred by their behaviour in cylindroconical vessels, the differing responses to temperature are clear (and provide a simple laboratory test). Ale yeast has a maximum growth temperature of 37.5-39.8C with poor growth at 6-12C whereas lager yeast has a maximum growth temperature 31.6-34.0C and correspondingly good growth at 6-12C. This may explain the difficulty that active dried yeast manufacturers have historically experienced in drying lager (but not ale) yeasts. Similarly lager strains can metabolize melibiose while ale strains cannot and there are subtle differences in the way the yeasts handle fructose and maltose.

Much circumstantial and increasingly direct evidence indicates that lager yeast/S. pastorianus is a natural hybrid of S. cerevisiae and S. bayanus. Key insights include the following

Hopefully this splendid work will continue. To sum up, in a more recent review, Kodama and colleagues (Topics in Current Genetics, 2006, 15, 145-164), noted that these findings tell us that the lager brewing yeast is not merely a polyploid with two divergent but similarly functioning genome parts, but is in fact a unique organism with a biological complexity larger that any of the species that took part in its formation.

Why not take a few moments to appreciate that next time you are about to take your yeast for granted?

First published 1 May 2007 in YeastBytes