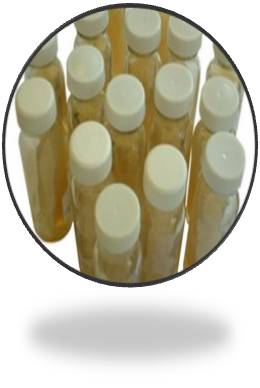 The agar slope remains the mainstay of routine yeast supply in industry. Whether a brewery, biotechnology company, or yeast manufacturing operation, agar slopes of ultra-pure yeast, prepared from cryogenically-frozen stocks, are a critical link in the yeast supply chain. But regardless of whether those slopes have been prepared in house or have been supplied by an external laboratory, the question remains “how long is too long?”

Provided the slopes have been prepared correctly on quality assured media (within a quality assured process) and have not been subjected to any form of abuse before you receive them (particularly excessive heat but also possibly light or – less likely – radiation) you can expect them to remain in good condition for 6-9 months.

Any longer and you’re risking running into trouble. Mitochondrial mutations can set in, driven by nutritional deficency, oxygen starvation and senescence. Viability will drop, and any cells which remain alive will become less physiologically-active, making them slower to start propagating when you do get around to using them. If your slopes have been prepared by a less than reputable laboratory (not your own lab of course!) contaminant microorganisms might be present alongside your yeast. Given enough time these can grow, even at low temperatures and compete with your yeast. For example, mould spores which have remained dormant for months can germinate and grow, soon swamping the whole culture tube with mycelia.

Eat your own dog food

It’s one thing to say what to do, it’s another to do what you say. So what do we do? At our Alfred Jorgensen Laboratory in Denmark and our Cara Technology yeast laboratory in the UK we prepare slopes immediately before dispatch to customers and label them with a six month ‘best before’ date. However, on yeast supply contracts we typically supply slopes every two months; so in practice slopes used to propagate yeasts in customer operations are never more than 3 months old. Yeast from an out of date slope is likely to be of compromised viability and may grow slowly in the initial stages of propagation. This hesitant start will then ‘knock-on’ to subsequent fermentations and impact on viability, flavour and vessel planning. There is also the possibility of inadvertently selecting more robust genetic variants from within the culture. These may give rise to abnormalities in beer production, including low alcohol yield, flavour problems, atypical flocculation, poor beer foam, and haze issues.

Similarly, in baker’s yeast production the consequences might be low yield, poor performance in the hands of the customer, and microbiological problems with production batches due to competition between contaminant microorganisms and a weakened yeast inoculum.

So the $1,000 dollar question! What is the best temperature at which to store agar slopes of yeast?

While slopes can withstand temperatures in excess of 20C for short periods (after all, yeasts are typically grown at 25C when preparing them) for long term storage in the refrigerator a maximum temperature of 8C is advised. This should be monitored regularly, ideally by using a recording digital thermometer placed beside the slopes in the refrigerator.

And what about the refrigerator itself? This should be of the type that does not automatically defrost. If you do not take this precaution you are inadvertently setting up a stress programme for your yeast. Go on, take a look today. It’s surprising how common a mistake it is to make.

It should also have a lock on it. Inside will be just about the most valuable thing in your brewery (your own very special yeast). Make sure that access to it is very, very restricted.

So how can we know that all is well?

First of all, use your eyes. Check how the slope looks – no excessive build up of moisture inside the tube, which would suggest it has been exposed to cycles of heating and cooling. No dehydration of the agar, suggesting it has been stored with the cap too loose. The right amount of growth present on the agar. Not too little, suggesting that the slope has been badly prepared or not too much, suggesting the slope is too old or has been stored too warm. No signs of microbiological contamination (a nigh-on impossible scenario if the slopes have been prepared to ‘best practice’). In date and the right strain code. No physical damage to the tube, which could represent a microbiological risk. Basic stuff, but remember that any mistakes made at this stage get to be magnified many times over further downstream.

Temperature indicating tabs can be applied to slopes as a further re-assurance of safe storage. Tamper-evident caps can also be used – ideal when the yeast supply operation demands that slopes should not be re-used. This point – use of the whole slope or repeated sampling – will be the subject of a future post.

4 thoughts on “No slippery slopes please – we’ve got beer to make!”